APRIL 10 & 11, 2021, 6-8:30 PM CEST (Berlin) | ONLINE
MAY 15 & 16, 2021, 6-8:30 PM CEST (Berlin) | ONLINE
SEPTEMBER 25 & 26, 2021, 6-8:30 PM CEST (Berlin) | ONLINE
Dr. STEPHANIE WEISS
(Arizona State University, University of Nevada-Las Vegas,
Metropolitan Opera Education, AIMS in Graz, Deutsche Oper Berlin, Oper Leipzig)
​
JULIE WYMA, EXECUTIVE DIRECTOR
​ANASTASIA INNISS, ARTISTIC DIRECTOR
Finding a singer’s unique and authentic voice is one of the most important jobs for any voice teacher. In this master class, we will focus on trans* singers of all voice types. Though there has been some research and movement toward better inclusivity, there have been few classes concentrating solely on trans* voices. In this class, we have the exciting opportunity to work on technical and performance ideas for the singers’ specific pieces, as well as discussing vocal issues that are specific to trans* voices. It is my hope through this class to address and answer common questions of trans* singers and to find freedom and optimal resonance in their singing.
​
-- Dr. Stephanie Weiss 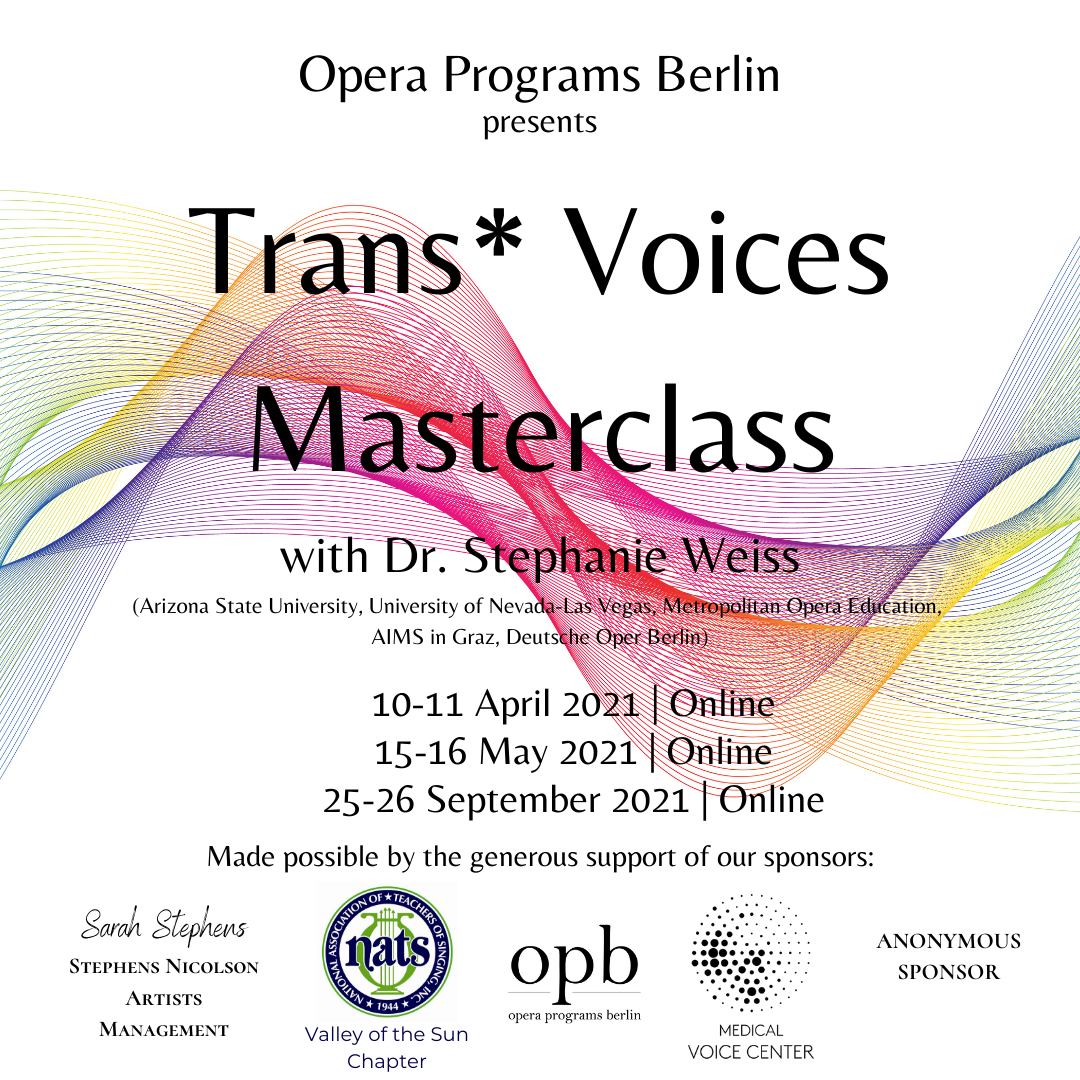 To apply as a participating artist in the masterclass, please submit the following materials via email to operaprogramsberlin@gmail.com:
FREE TUITION
Participation for all accepted artists will be FULLY SUBSIDIZED by generous donations from these sponsors:​
LIST OF ACCEPTED ARTISTS
FACULTY 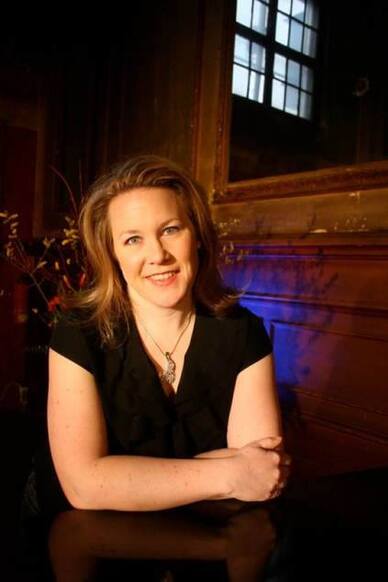 Stephanie Weiss, mezzo-soprano, was a Regional Finalist of the Metropolitan Opera National Council Auditions and recipient of a Richard F. Gold Career Grant from the Shoshana Foundation from Mannes College of Music. As the winner of the American Berlin Opera Foundation Competition, she became a member of Deutsche Oper Berlin as a Stipendiatin, where in her first season, while still a soprano, she sang Frasquita (Carmen), Musetta, Erste Dame (Die Zauberflöte), Gerhilde (Die Walküre), and Schlafittchen in the Berlin premiere of Das Traumfresserchen.
​
Ms. Weiss continues to be a regular guest at Deutsche Oper Berlin, where she has sung Marianne Leitmetzerin (Der Rosenkavalier), Aufseherin (Elektra), Zweite Dame (Die Zauberflöte), Grimgerde (Die Walküre), Johanna [cover] (Szenen aus dem Leben der Heiligen Johanna), and Venus [cover] (Tannhäuser) in the company’s tour to Beijing. Other appearances include Opera Orchestra of New York under Eve Queler at Carnegie Hall as Rose (Lakmé), Berlin’s Staatsoper Unter den Linden as Erste Dame (Die Zauberflöte), Marcellina (Le nozze di Figaro) and Marthe (Faust), at Oper Frankfurt as Musetta, and at Stadttheater Bern, San Diego Opera, Oper Dortmund, and Oper Köln as Marianne Leitmetzerin. She debuted with the Berlin Philharmonic as the Cook in Le Rossignol under the baton of Pierre Boulez. Other notable performances have  included Venus (Tannhäuser) with Mecklenburgisches Staatstheater Schwerin, Berta (Il Barbiere di Siviglia) and Suzuki (Madama Butterfly) with Opera Las Vegas, and a return to the San Diego Opera as Giannetta (L'elisir d'amore).

Concerts include Wesendonck Lieder with the Henderson Symphony Orchestra, Lieder eines fahrenden Gesellen and Symphony No. 4 with the L’viv Philharmonic (Ukraine), and Santuzza (Cavalleria rusticana) with Singakademie Potsdam.  Recent appearances include Grimgerde (Die Walküre) at Oper Leipzig, Sorceress (Dido and Aeneas) with Opera Company of
Middlebury, a return to Deutsche Oper Berlin to sing Zweite Dienerin (Die Ägyptische Helena) and Aufseherin (Elektra), and the title role of Johanna (Szenen aus dem Leben der Heiligen Johanna) by Walter Braunfels at Oper Köln.  In the 2017/2018 season, she sang Aksinja in Lady Macbeth of Mzensk at Deutsche Oper Berlin, and returned to Oper Leipzig to sing Grimgerde
in Die Walküre.

Along with operatic and orchestral concert repertoire, Ms. Weiss is an avid performer of art song and new music.  She has performed recitals in the US, France, Germany, Switzerland, and Australia, singing the music of award-winning American and German living composers. With her ‘duo au courant’ partner, pianist Christina Wright-Ivanova, she has sung the world premieres of several song cycles, including Jonathan Stark’s “Passageway”, and Daron Hagen’s “Jaik’s Songs” and “A Handful of Days.” In 2019, the duo released their debut CD of the songs of Daron Hagen, titled Sacred and Profane, on the Albany Records label.

In addition to her singing, Ms. Weiss is Assistant Professor of Voice at Arizona State University’s Herberger Institute for Design and the Arts School of Music. Her research interests include the Zwischenfach voice, as well as transgender singers and related pedagogy. Her experience with transgender singers began with her interest in vocal pedagogy and a transgender
student approaching her to ask if she would be willing to work with her. Not knowing much about trans* voices at the time, she took her on and together they explored the voice. Not long after, she began working with another transgender student which led her to learn more about hormonal effects on the voice, especially for trans masculine singers. An advocate for trans* voices, she has been sought out by and worked with several trans* singers of multiple voice types and various styles. Though there are specific issues intrinsic to certain trans* voices that must be addressed, Ms. Weiss finds that it is teaching the whole person and artist to be the most important. Her teaching philosophy is to help any person find their most authentic, free, and beautiful voice and be able use it to express emotion and ideas; she aims to do this for any singer who enters her studio. Continuing to broaden her knowledge of the voice, specifically with relation to trans* singers, she is working towards a certificate in Speech and Hearing: Communication Sciences to complement the degrees she holds from New England Conservatory (B.M. voice), Tufts University (B.S. biology and drama), University of Missouri-Kansas City (M.M), Mannes College of Music (Prof. Studies Dipl.), and University of Nevada, Las Vegas (D.M.A.). Previously, she was Assistant Professor of Voice at University of Nevada, Las Vegas, a Teaching Fellow with the Metropolitan Opera Education Department, on the faculty of COSI (Centre for Opera Studies in Italy) in Sulmona, Italy, every summer teaches at AIMS in Graz in Austria.